This beautiful raised relief high quality lead free pewter or sterling silver design is available in a full matching set of items.  Great for a wedding for the groomsman or bridesmaids. An excellent matching set!
This is truly an amazing piece… one of our favorites. It is complex in both design and meaning and it is beautifully crafted by hand.
Perhaps the most notable feature of this design is the repetition of the “3’s”. A mystical number and this piece has 3 groups of three. See the full story at the bottom of the page. 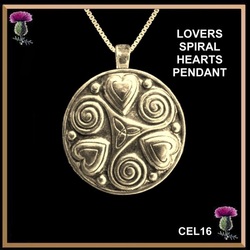 This is truly an amazing piece… one of our favorites. It is complex in both design and meaning and it is beautifully crafted by hand.

Perhaps the most notable feature of this design is the repetition of the “3’s”. A mystical number and this piece has 3 groups of three.

At the centre of the design there is a triquetra. A three sided knot. Spiraling outward from the centre is a triple spiral whose arms circle ever inward in a whirlpool design.

The triple spiral, also known as the spiral of life, found wide usage in the artistic expressions of the ancient Celts. Since ancient time, spirals have represented spiritual growth, the ever expanding journey of the soul from the sacred vortex uncoiling outward to fill the universe, then returning to the balanced center, the creative source of spiritual power and rebirth. Spirals are a natural pattern found in wind and water currents, fern fronds, shells, and seeds and express the unfolding of the earth’s energies and the expansion of the universe.

Between the arms of the triple spiral there are three hearts each composed of three hearts. Hearts have been used as a symbol to refer to the spiritual, emotional and moral core of a human being. Poetically used to refer to the soul, hearts are most commonly used as symbols representing love. The Celtic heart is among the most romantic of symbols, formed from one continuous line, representing the union of souls in a visual continuity, of continuing faith and love as one travels through the journey of life. This unique piece has a second heart engraved within the heart.

On either side of the triple spiral there are round beads or granulation. The Celts were highly skilled in the use of “granulation”, a process where round balls of one metal were fused to the surface of another metal… very tricky and even today jewelers do not know how they did this with such primitive tools. Each ball is the same size and perfectly formed.

The overall design is a circle representing the full moon and the cycles of a woman’s fertility.. a symbol of birth and the continuity of life.

The meaning of the number 3?

There are several opinions about what the “three” might mean.

A superb and meaningful creation into which much thought was invested. A marvel of design.