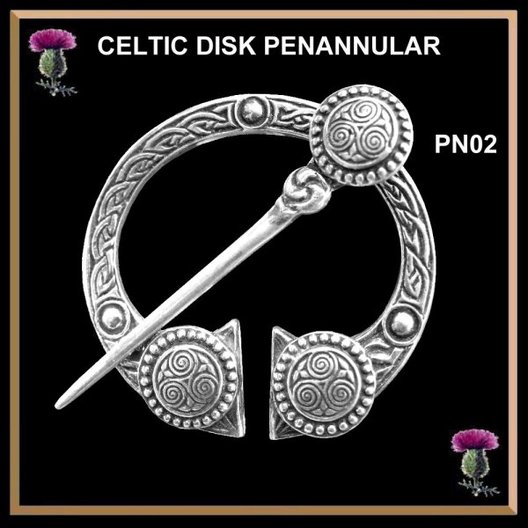 This penannular can be worn a number of ways . It is an amazingly beautiful piece! This hand cast piece combines many of the elements that make Celtic art outstanding, There are three bosses representing eggs or rebirth. There are woven Celtic interlace designs between the bosses all along the circular penannular ring. These are the symbol of eternal life. The three raised relief circles, two on each side of the opening and one on the pin stem have intricately   engraved triquetra and triskele. Surrounding the triquetra's and spiral trickles there is  round granulation for which the Celt jewelers were renowned. How did they do that with the crude tools that existed eons ago?

The number three and circles are repeated in almost all of the design elements.( See below for more detail on these)

A truly stunning piece that is sure to draw both admiration and comments.
The use of many of these elements was revisited by the great silversmiths of the  Celtic Revival period (See below) reached back into time and drawing on the ancient pieces found on the Holy Isle of Iona

The hallmark is very hard to read but the makers name CA is visible. This stands for a Celtic Arts.  A very high end extremely collectible old silversmith company that started in the  early 50's.
A timeless design for the millennium worn today as in centuries past. Large and heavy at 13 grams and 1-1/2"across the pin stem.

The triquetra are often found in Insular art, most notably metal work, Celtic stone crosses and in illuminated manuscripts like the Book of Kells. This widely recognized knot has been used for the past two centuries as a sign of special things and persons that are threefold, The Celts were very familiar with the idea of the trinity, everything came in threes; such as Mother, Daughter and Grandmother (Crone) - Past, Present and Future - Self, brother, and sister, - Man, Woman, God - and Christianity embraced this knot, famously by Saint Patrick and the shamrock, to symbolize the Father, Son, and Holy Ghost thus the triquetra appears in many of the early Christian illuminated manuscripts such as the Book of Kells.
According to Uriel's Machine by Knight and Lomas (2003) the triple spiral may represent the nine month period of human pregnancy, since the sun takes a fourth of a year to go from the celestial equator (an equinox) to extreme north or south declination (a solstice), and vice versa. During each three-month period, the sun's path across the sky appears to form a closely-wound quasi-helical shape, which can be likened to a spiral, so that three spirals could represent nine months, providing an explanation for a link between fertility and the triple-spiral symbol. Celtic art lives on as both a living folk art tradition and through several revivals.