Saint Brigid, second only to St Patrick as the patron saint of Ireland, is also commonly known as Saint Bride or Bridget (451-523AD). According to tradition, she was a woman of great beauty and ability. She was brought up in a Druid household, but not wishing to marry her chosen suitor at the age of 14, she went to live as a nuns in a small convent under a large oak. The monastery of Kildare was later founded there. The name Kildare means Church of the Oak. (She was also the patroness of the Knights of Chivalry and it is suggested that the word bride entered the English language because these knights married women who became their very own 'brides'.)

It is a traditional Irish story, that while teaching a dying old man about Christianity, St. Brigid made a cross from rushes in order to explain the crucifixion and the message of salvation. This was the first St Brigids Cross. St Brigid Crosses were hung in stables and houses to bring protection to the family and animals. Even to this day similar crosses are made of rushes and placed in the rafters of a dwelling to protect from harm.

The feast day of Saint Brigid is celebrated on the first day of February, the supposed day of her death (This is also the date of the Celtic fire festival of Imbolc, celebrating the return of light after the darkness of winter.) As this is the first day of spring also in the Celtic calendar, it was an important time for farmers as it was a sign of the end of winter. 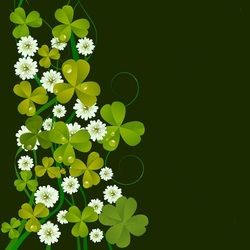