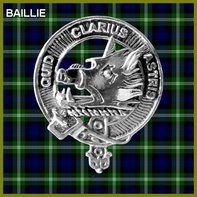 CLAN BAILLIE BADGE
The most likely derivation of this name is from the French “baillie”, meaning “bailiff or “steward”. This was an office of great importance in medieval times. One of the earliest records of the name appears in 1311 when William de Baillie appears as juror in a case concerning land in Lothian. Nisbet records that, according to family tradition, the Baillies of Lamington were truly a branch of the great house of Balliol, Lords of Galloway and some­time kings of Scots. The family was said to have changed its name due to the unpopular­ity of the Balliol kings after the succession of Robert the Bruce. There is, however, no real evidence to support this tradition, particularly as the name Balliol remained fairly widespread in Scotland after that time. William Baillie of Hoprig was knighted by David II in 1357 and received a royal charter to the barony of Lamington in 1368. The lands remained in the family until the present time. Sir William established the family fortunes and from him are descended the Baillies of Carphin, Park, Jerviston, Dunrogal, Carnbroe, Castlecarry, Provand and Dochfour. Alexander Baillie, a younger son of Lamington, fought at the Battle of Brechin in 1452 and was rewarded by the Earl of Huntly with the lands of Dunain and Dochfour near Inverness. Re was also appointed constable of Inverness Castle. The family played a prominent part in affairs around the Highland capital, and formed alliances by marriage to many notable local families. Cuthbert Baillie of Carphin was Lord High Treasurer to James IV in 1512. Sir William Baillie of Provand was called to the Bench in 1566, taking the title of “Lord Provand”. He was Lord President of the Court of Session from 1565 to his death in 1595. The principal house of Lamington suffered the vagaries of fortune after having risen high in royal favour when Sir William Baillie married Janet Hamilton, daughter of James, Earl of Arran and Duke of Chatelherault. He was made Master of the Wardrobe to Queen Mary in 1542. Faithful to her daughter, Mary, Queen of Scots, they fought at the Battle of Langside in 1568, after which the estates were declared forfeit. His grandson was the famous General Baillie who was soundly defeated by the Marquess of Montrose at the Battles of Alford and Kilsyth in 1645. The general had two sons, both of whom married daughters of the Lord Forrester of Corstorphine, to whose estates they eventually succeeded. The Reverend Robert Baillie, descended from the house of Jerviston, was a renowned Protestant minister and chaplain to the Covenanter armies in 1639. His daughter, Margaret, was to marry a Walkinshaw of Barrowfield, ancestor of the celebrated Clementina Walkinshaw, the mistress of Prince Charles Edward Stuart, the “Young Pretender”. Robert Baillie of Jerviswood was also a staunch Protestant, whose outspo­ken views on civil and religious liberty were ultimately to result in his death. A cadet of the Lamington family, be was planning to emi­grate to South Carolina in 1683, believing that there was no escape from the oppression of the government of the time. He was also in correspondence with leaders of the faction opposed to the succession of James VII in England, and prior to his intended journey he went to London to consult with the Duke of Monmouth (later involved in a rebellion, and executed) and others. Baillie had no connec­tion with any conspiracy to overthrow the government but he was nevertheless arrested and charged with conspiracy to commit high treason. He was convicted in the High Court at Edinburgh on 24 December 1684 and sen­tenced to be hanged the same day. His family was forced to flee to Holland and the estates were not restored until the overthrow of James VII in 1688. Lady Grizel Baillie, the poet and songwriter, who died in 1746, was the wife of George, the ill-fated Laird of Jerviswood’s son. This branch of the family was ultimately to succeed by marriage to the earldom of Haddington, a title which they still hold. In 1894, James Evan Baillie of Dochfour married the daughter of the first Baron Burton, the great Victorian industrialist. Lord Burton died without male issue and the peerage has now passed to the Baillies of Dochfour, who still have a great estate on the shores of Loch Ness.