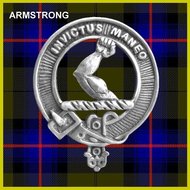 CLAN ARMSTRONG BADGE
On the western marches of the Borderland, the “sturdy Armstrong's, who were for ever riding” held the wide haughs and gently-rolling hills of Lower Liddesdale in the days before the Scottish and English crowns and parliaments were joined. It was wild and hard of access even when Sir Walter Scott, in his vacation raids into the valley, examined the ruined peel towers and explored the hidden retreats of this once numerous clan.

Gilbert Armstrong, steward of the household to David II, was sent on an embassy to England in 1363, and there were Armstrong's at Mangerton in Liddesdale thirteen years later. By the i6th century they occupied a large part of the “debatable lands” between the two kingdoms, and had spread into Eskdale, Ewesdale, Wauchopesdale and Annandale. A descendant writes of “the honourable profession of moss-trooping”, for they counted themselves leviers of tribute rather than plunderers, and prided themselves on the good rule they exercised over a lawless set. The Border ballads testify how in the process they defied the wardens of the marches and even the king himself.

One of the most notorious was Johnnie Armstrong of Gilnockie, who encountered James V during a royal progress designed to restore order in 1530. John had ridden out gaily with a score or so of well mounted and appareled henchmen to meet the king; he had an angry reception, and tried to bargain for his life with offers to keep himself and forty gentlemen always ready for the king’s service, never to rob Scotland or the Scots, and to produce on a given day any English subject dead or alive, however high his degree. But all in vain: Johnnie was summarily hanged on the spot with all his fol­lowers, an example of rough justice which was fine material for the chroniclers and balladists, and long remembered on the Borders. Less picturesque is the fact, attested by contemporary records, that only a few years before John had signed a “bond of manrent” promising personal service and support to one of the Scottish wardens, and that later in the same century an Armstrong of Arkilton and others of his “branch, kin and friends” submitted their quarrel with some Elliot neighbours to the Privy Council’s arbitration, accepting their decision in advance.

In what Scott-no mean judge in such matters-called “one of the last and most gallant achievements performed upon the Border”, another Armstrong known as “Kinmont Willie” was rescued from prison in Carlisle castle by Scott of Buccleuch and a raiding band which included Willie’s four sons. He had been taken by the English while returning home from a warden court, and Buccleuch had failed to secure redress for this unsportsmanlike act. As King James had reached an understanding with Elizabeth by the time this happened, in 1596, and it was a period of official Anglo-Scottish friendship, uproar and diligent inquiry followed; but a year later we find “Will of Kinmonth” named among the leaders of a band of Armstrong's called “Sandie’s bairns”.

Away in London, James and his son Charles must have had many a laugh from their court jester, Archie Armstrong, whose nimble tongue “jested him into a fair estate”. But the last laugh was with the clan, when Gilnockie’s descendant “Christie’s Will” kidnapped one of the king’s judges in Edinburgh and kept him out of harm’s way in Annandale while a friend’s case was decided in his favour; and as late as 1629, King Charles was issuing a pardon to Armstrong of the Ash, Edward Armstrong alias Kinmond, Hector alias Stubholme, and John Armstrong called John-with-one-hand.

In the course of securing peace on the Border, however, leading Armstrong's were brought to the scaffold, their strongholds razed to the ground, and their estates given to others, until hardly a single landowner of the name was left throughout the extensive districts they once possessed. Mangerton lost his life and lands after a single raid in 1610; Armstrong of Whitehaugh was executed two years later, though his branch survived in Liddesdale for a further 200 years. The clan found other outlets for their energies: some were distinguished in medicine (one pioneered research into poliomyelitis), others in engineering (from motor cars to ordnance); an Armstrong discoverer of the North-West Passage wrote the name on an island in the Canadian Arctic; and we can be sure that some of the sturdy Armstrong blood flows in the veins of the first man to walk on the surface of the moon.