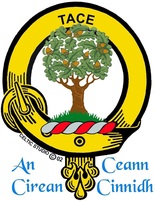 CLAN ABERCROMBIE BADGE
The name comes from the barony of Abercrombie in Fife and in 1296 it was held by William de Abercrombie. The Abercrombies of that Ilk died out during the 17th century and the cadet branch, the Abercrombies of Birkenbog in Banffshire, took over as representatives of the main line. They became baronets in 1636.   The Abercrombies have been noted for their religious commitments, remaining Roman Catholics during the Reformation. One of them, John Abercromby, a Benedictine monk was executed for attacking the doctrines of Knox and another, Robert, was a Jesuit priest who was alleged to have converted Queen Anne of Denmark, wife of James VI before her death. Robert suffered imprisonment but escaped and succeeded in getting out of the country despite a reward attached to him to the order of  £10,000.
Sir Alexander of Birkenbog was a devout covenanter so much so that Montrose undertook to quarter his troops on his estate during the Civil war. However his son, Patrick returned to the Catholic faith and was briefly the physician to King James VII/II in 1685.  His brother Francis was created Lord Glasford by the same King.   In more modern times the Abercrombies have become renowned in the army. Sir Ralph Abercromby (1734-1801) was the great General at the onset of the Napoleonic wars. He and Sir John Moore reformed the army that was later to win under Wellington and in Ireland he tried to curb the English and Scottish forces against the Irish.  This in turn led to his removal. In the end he was fatally wounded in Egypt. One of his sons also became a General and later Lord Abercromby of Tullibody.  Another son, James, became speaker of the House of Commons and was raised to the peerage as Lord Dumfermline.