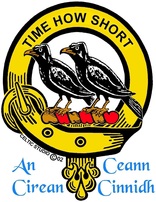 CLAN AKINS BADGE
The earliest origins of the Clan Akins lie shrouded in Scotland’s distant past. The meaning of the name itself is not fully certain and theories of it’s origins are debated by scholars.
As a place name, Akin occurs in the west coast of Scotland, on the Hebridean Isle of Skye. Here, in the 13th century, the Viking leader, King Hakon IV of Norway, stealthily crept with his invading army in a fleet of longboats, on his way to defeat at the hands of the Scottish king, Alexander III, at the Battle of Largs in 1263 A.D.
To commemorate his passage through this region, the narrow strait between the Isle of Skye and the Scottish mainland, through which Hakon sailed, was afterwards known as Kyleakin, from the gaelic words Caol Acain, meaning “the Strait of Hakon” in the native Celtic language of the Scottish people.
This area is home to the Skye Village of Kyle Akin, named for the strait on which it is located, and is also the site of Dun Akin (Dunakin) castle, a 12th century fortress, long held by the Mac Kinnon clan.
As a surname, the first recorded appearance of its use occurs in the year 1405, when “John of Akyne”, a Scottish merchant, petitioned the court for the return of his ship and goods, which had been illegally seized in England.
Other instances of its use occur in the early records of Scotland, where we find mention of William Ackin, who was a witness in the parish of Brechin in the year 1476. John Eckin was a tenant under the Bishop of Aberdeen in 1511. John Ackyne served as bailie of Stirling in 1520. Robert Aykkne was admitted to the burgess of Aberdeen in 1539. Bessie Aiken of Leith was found guilty of witchcraft in 1597, narrowly escaping execution. Mrs. Mary Akin of Aberdeen was an early immigrant to America, settling in Rhode Island before 1678. Dr. Joseph Aiken published a poem in 1699 entitled “Londerias, or, a narrative of the seige of Londonderry”.
The clan name, under its various spellings, was among the 100 most frequently encountered surnames in 19th century Scotland, ranking 90th in occurrence, with an estimated number of 5,992 persons bearing the name in one of its many forms. Variations of the name were said to be common in the parish of Ballantrae, as well as in the cities of Aberdeen, Edinburgh, Glasgow, and Stirling.
When Ireland’s northern province of Ulster was opened up for colonization by Scotland’s King James VI, members of the Clan Akins were among the thousands of Scots who settled in that troubled region, seeking a better way of life.
In Ireland, the name is common only in Ulster, but here new variations in spelling began to occur. Eakins in Belfast, Eakin in County Derry, Ekin in County Donegal, and Egan in County Down. In County Antrim, where the name is most popular, it was found to be most concentrated in an area northwest of Ballymena in the mid 19th century.
When the British government began to oppress the Scots colonists who had settled in Northern Ireland with heavy taxes and religious persecution, many of them left, fleeing to North America as a safe haven, where they might start new lives for themselves. It was in this way that many members of Clan Akins came to America.
Between 1717 and 1776, some 250,000 people left Northern Ireland, mainly for what is now the United States. In the year 1729, more than 6,000 Ulster Scots arrived at the port of Philadelpia alone. More than 100,000 came to America in the two decades following the Revolutionary War.
Thus, with a total of some 11 million citizens of Scottish and Scots-Irish descent, the United States can claim to have the largest population of Scots in the world, and it is here that the Clan Akins is its strongest.